Why Learn And Use Elixir?

This blog post is meant to accompany the first lecture1 of our course Functional Programming with Elixir, that takes place in FMI (Faculty Of Mathematcis And Informathics of The Sofia University) during the summer semester of 2018/2019. We will discuss why one would want to learn and use Elixir. But first, a bit of history:

Erlang is a functional language, developed in the mid-80s by Ericsson with the intent to build telecom software. Although, the motivations behind its creation were primarily driven by the field's specific requirements, Erlang can be applied to many other needs. One of least cited reasons2 behind its development was the need to replace the highly specialized hardware and software used at the time (including the operating system). Erlang does not explicitly support the programming requirements of a telephone or otherwise telecom venture, nor does it pose any specialized hardware or OS requirements. Instead, the language offers solutions to the technical needs and problems encountered while developing this type of software:

All of this happened at a time, when internet was not yet widespread and most programs worked on a single computer with no connection. This type of software does not require any distributability or horizontal scalability. At the time, personal computers did not have 2-, 4-, or 16-core processors – the need for the software to automatically accelerate with addition of more processors/cores was not yet present. This directly impacted the design and purpose of the programming languages developed at this time or those earlier ones they were based on.

Even if you never use Erlang, its ideas and approach3 to solving a specific type of problems is easily applicable when using other languages.

Where does Erlang stand today?

All of the above sounds good, but how many of us write telecom software or, in fact, any software with such requirements? Well, a lot of us, actually. The requirements of today's web applications overlap completely with the concerns addressed by Erlang's creators at the time of its development. Having a language and a platform based on meeting those specifics without the need to load external libraries to implement the missing functionality of the language is a huge advantage. 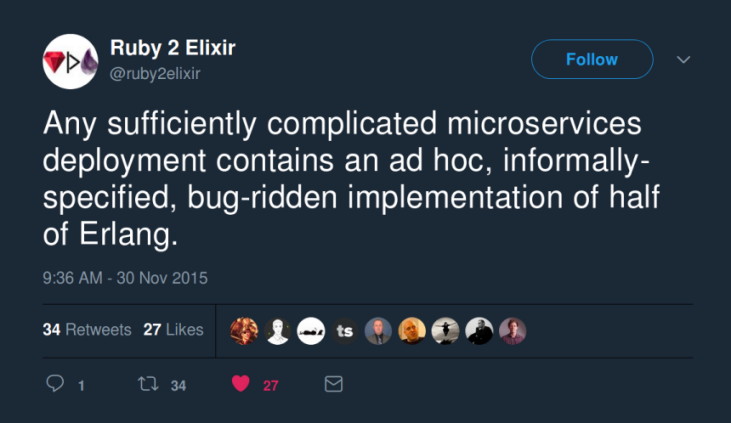 If you want to know more about the guarantees provided by BEAM4 – the virtual machine in which Erlang runs, you would do best to watch this video.

Why do talk so much about Erlang in this article named "Why Learn And Use Elixir?" 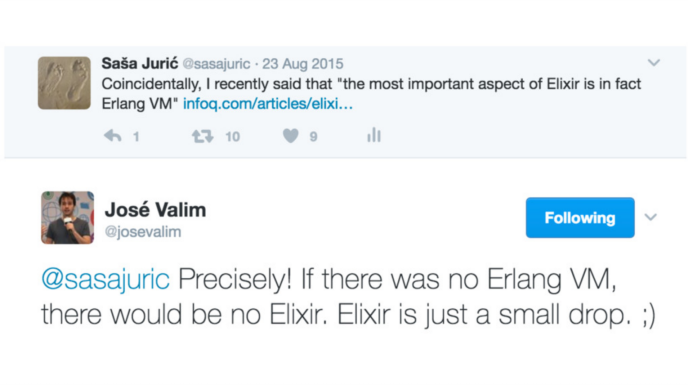 Elixir is a functional language. Its development started in 2011, with version 1.0 going live in 2014.

Elixir runs on Beam. It can use everything that was written and everything that could be written in Erlang. This allows us to combine a new and modern language with libraries that stood the test of time. Elixir's Erlang basis does not come with any additional hassle or the need to use cryptic syntax or type transformations. Let's compare the different ways Elixir and Erlang call a function from a given module:

Elixir modules always start with an upper case, while Erlang modules start with : and a lower case.

Let's look at just some of the things WE like about Elixir/Erlang:

It's wrong to think of Elixir as a competitor that will tank Erlang. On the contrary, Elixir is one of the best things to happen to it. Erlang, as the basis, has seen massive development due to the interest in Elixir and the influx of new people to the community.

But since Elixir emerged and we're running a course about it and not Erlang, it must bring something new to the table:

Let's look at an example of the difference between a code that uses |> and code that does not.

The goal is to execute a number of transformations on a list of numbers.

One way to write this out is:

What if we don't want to use so many temporary variables? We can implement the functions:

In this example, readability is near-zero and adding further transformations is hardly convenient.

This is where |> comes in handy. It presents the result on its left side as a first argument in the expression on its right. Nothing more, nothing less, but just enough to allow us to write code in the following manner:

What about the downsides of Erlang/Elixir?

Just so we're not blindly spewing superlatives about the language, it would be appropriate if we mention some of its disadvantages. Some of them are in the below list, just because they're unseemly at first glance, but do carry value that starts to show over time and we will explore why.

The library problem is one that every language suffers at this stage of its development. To clarify, we are not talking about important libraries like HTTP server/client, database, web framework, JSON decoders, etc; libraries like that are available, and they're quite good, too. We're talking about small things that aren't really a problem of the language or the platform and is fixable, albeit slowly over time. During this FMI Elixir course we will take into account contributions to open source libraries and credit will be given accordingly. Even more so for newly created libraries.

[2] Williams, Mike. The True story about why we invented Erlang and A few things you don’t want to tell your Manager. Erlang Factory, 26.02.2011. Available from: https://www.erlang-factory.com/upload/presentations/416/MikeWilliams.pdf [cited 22.02.2019].